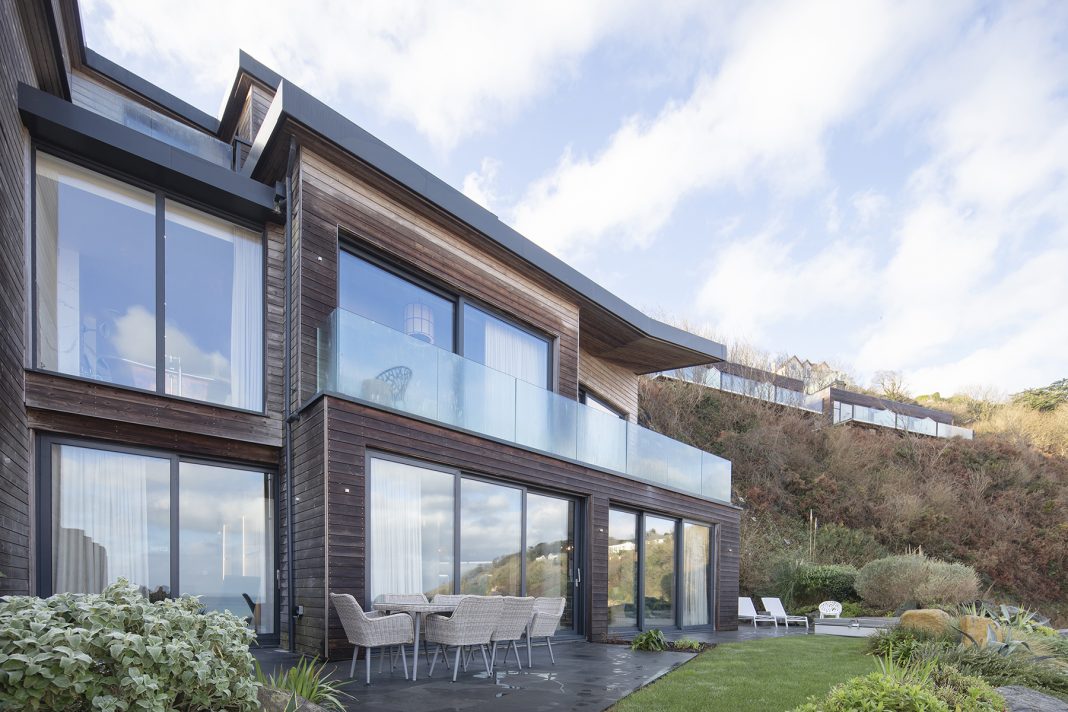 While talks during last summer’s G7 conference, held at the stunning Carbis Bay Hotel in Cornwall, may have been stormy at times, the venue remained well protected against the exposed coastal climate thanks to

Andy Hart, Technal account manager for the region, said: “The Carbis Bay lodges and new wedding venue are a stand-out project for us: not just because of the challenges to the location, literally right next to the sea, but because it also demonstrates Technal’s value as a one-stop shop.  We have the range of systems to fulfil any contract from volume housing through to the ‘Grand Designs’ type properties and commercial work.

“For locations such as this, systems like Dualframe, C160 Sliders and Crown Sliding Folding doors work at the scale to maximise the views while delivering the necessary resistance to wind, air and water.”

The fabricator, which operates a 20,000 square feet facility at Pinhoe, put forward the

Technal systems for the project, primarily on the basis of their weather performance and resistance to the aggressive marine environment.

Harmony founder Martin Breyley added: “We were one of three companies invited to meet the owner of the Carbis Bay Hotel, Steve Baker, and his project manager, Mark Senton, following a recommendation from one of our clients in Cornwall.

We then put forward the Dualframe and other Technal products on the basis of the level of support, as well as performance, the manufacturer offers. I have been using Sapa-Technal systems since 1989 for contracts across the South West including schools, hospitals and other PFI projects.”

Construction of the MUV (Multi Utility Venue) building and the eight lodges was split into two phases, but ended up running concurrently: which increased the logistical challenge as the hotel remained open through the year-long period of works – including for weddings on the beach.

Martin continued: “The fact that the buildings are right down at the level of the beach inevitably increases the glazing systems’ exposure to salt spray as well as driving rain when the weather is bad, so we relied on Technal’s technical department to supply all of the relevant testing certificates to verify the corrosion resistance, wind pressure ratings and other specification requirements. There were a lot of meetings regarding this project, while deliveries to our Pinhoe plant near Exeter were kept up throughout.”

Harmony’s package for the Carbis Bay project included the design, manufacture and installation of 29 sets of two or three panel C160 Sliders: all 2700mm high, installed in the seaward facing elevations of the eight luxury lodges.  Accommodating up to eight people, these also feature Dualframe 75 Si entrance screens, into which the client installed timber doors.

The ground floor to the MUV building is given over to three retail units, the entrance to each of which is formed of a Crown Sliding Folding doorset standing 2600mm high.  On the floor above are guest bedrooms with seven sets of 2800mm tall C160 Sliders, as well as Dualframe residential doors, giving access onto the balconies.

The top floor of the venue then offers panoramic views of the bay through a series of Elegance 52 screens, with automatic opening, top-hung vents providing easily controllable ventilation while the glazing throughout is SKN 176 solar control. The curtain walling includes a run that is faceted to follow the curve of the building’s end wall, while more C160 Sliders are set behind ‘Juliette’ balconies to open out onto the seascape view.